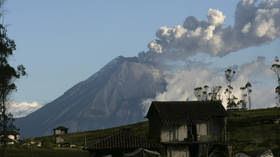 Ecuador’s Tungurahua volcano has been in an active state since October 1999. © REUTERS/Carlos Campana
Scientists are warning that the Tungurahua volcano in Ecuador is showing early signs of impending catastrophic collapse, after satellite data showed substantial internal damage from ongoing magma activity.

Tungurahua, has been persistently active since 1999 so wear and tear was inevitable, especially given that the ‘Throat of fire,’ or ‘Black giant’ as the Quechua indigenous people named it, has already collapsed twice before thousands of years ago.